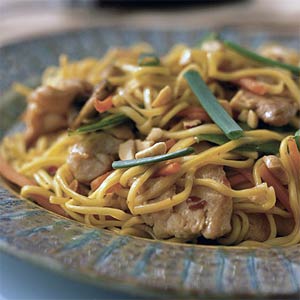 There are a number of Chinese dishes that people have on their fingertips and are able to point out just by looking at them. Some of these dishes, which have gained worldwide popularity over the years, are Chow Mein, Shashlik and Black Pepper Chicken; however, this list is far from exhaustive when it comes to Chinese cuisine.

The Chinese food we are accustomed to eating is a lot different from what the natives really eat. These dishes have been modified to cater to a wider, international audience, and when people hear names like Lo Mein, they automatically relate it to Chow Mein.

While both dishes do consist of noodles, and are similar in appearance, Lo Mein and Chow Mein are very different. Looking at the literal meanings, Lo Mein means “tossed noodles” while Chow Mein means “fried noodles”.

Chow Mein noodles are those which are fried with various ingredients in a wok. Ingredients like chicken and various vegetables are usually prepared separately and are mixed with noodles later on to infuse the flavors when frying. Flavor in the Chow Mein dish comes from the vegetables in it rather than the complimenting sauce.

Lo Mein on the other hand, consists of noodles which are usually boiled and not cooked again, unlike the case with Chow Mein. These noodles are boiled with various types of sauces and have the flavors infused into them, leaving out the need to add any external ingredients to improve the taste. Due to the frying, Chow Mein noodles have become more popular around the world with their oily flavor and crispy texture, while Lo Mein noodles are more traditional and less popular.