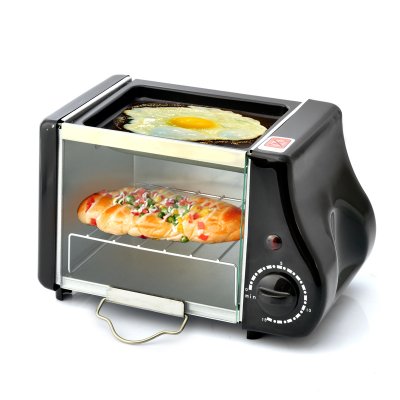 Most of us are familiar with a toaster that runs on electricity and is used to make crispy bread with cheese or butter as toppings for breakfast in the morning. Just like a regular toaster, a toaster oven has the ability to toast bread as well as performing other functions such as broiling and baking. The toaster oven also runs on electricity but it slightly bigger in size when compared to the regular toaster. Although toaster and toaster oven have similar names, there are several differences between these two appliances. The iron tray inside the toaster oven can be easily taken out. You can then adjust the toast setting according to your needs to place brown bread pieces on the tray. The timer will notify you when toast is done so you can take the tray out and serve crispy bread pieces.

A large number of people in the West cannot start their day without having toasted bread with butter or cheese in their breakfast meal. We all know there is nothing better than crispy bread with a layer of cheese on it. The electrical device that is used to make the pieces of bread crispy is known as a toaster. Considering the need for preparing crispy bread in every household, toasters have become one of the most commonly used kitchen appliances over the last few years. Top up toasters is another very popular form of toasters that take brown and white bread pieces effectively and efficiently. Toasters today are safe and easy to use.