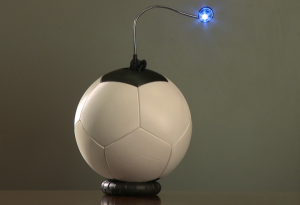 Around 25 percent of kids around the world do not have access to electricity. Most of them, however, are very fond of playing soccer. By using this data, four students from Harvard University have made a product that complements each other. These students have invented a conceptual soccer ball that captures energy from kicking, trickling and throwing. The energy stored can then be used to power up electric or electronic devices. It is one of the breakthrough innovations of the year. After playing from this soccer ball, one can bring it home and charge a cell phone, battery or LED lamp.

Soccer is known to be the world’s most played game – specifically in the rural area. However, people from these areas are still deprived of this basic necessity. Harvard university students – Jessica Matthews, Hemali Thakkar, Jessica Lin and Julia Silverman – came up with the solution to this problem.

Jessica Lin said, “Soccer is something you will find in every African country. People play for hours a day, so we thought, ‘Why not try to get a little more out of that energy?’ and that’s where the idea ultimately came from”.

The students named this invention as “sOccket”. The ball is a bit heavier than a usual ball whose weight is 16-oz whereas this innovative soccer ball is 21-oz. The ball is powered with gyroscopic mechanism which allows an internal battery to capture energy that can be used later on. When the ball is kicked around, a magnet inside the it bounces back and forth through an inductive coil which eventually creates energy. It requires only fifteen minutes of play which then powers a light for maximum three hours.

The device became so popular that it even received appreciation from the former President Bill Clinton. It is indeed a futuristic product that will benefit many soccer lovers.


Posted by chris_ellsbury in Universities