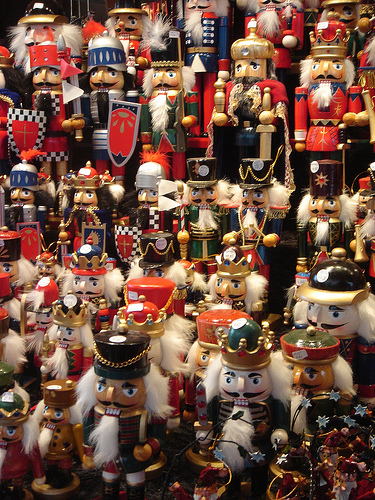 Nutcrackers are small wooden dolls which carry a rich history with them. It was a German creation that acquired huge fame and eventually went on to become traditionally attached to Christmas. The nutcrackers are actually a group of an army of soldiers which is led by a king nutcracker. The first ever nutcracker was made of two pieces of wood, the people who created the actual nut crackers preferred to use ‘’boxwood’’ later on people in France and England adapted the same type of wood as well, The reason being that the boxwood was sturdy and strong some examples are the few ancient Nutcrackers that are still seen in museums. The miniature and precise carving done on these dolls, makes them more attractive and interesting, which is why they attained immense early fame. A fact that some of us are not familiar with is that the nutcrackers were use to crack nuts back in the days and that’s from where they attained their name as the nutcrackers. There is another confusion about whether they are action figures or dolls? Well It all depends on the eye of the beholder.