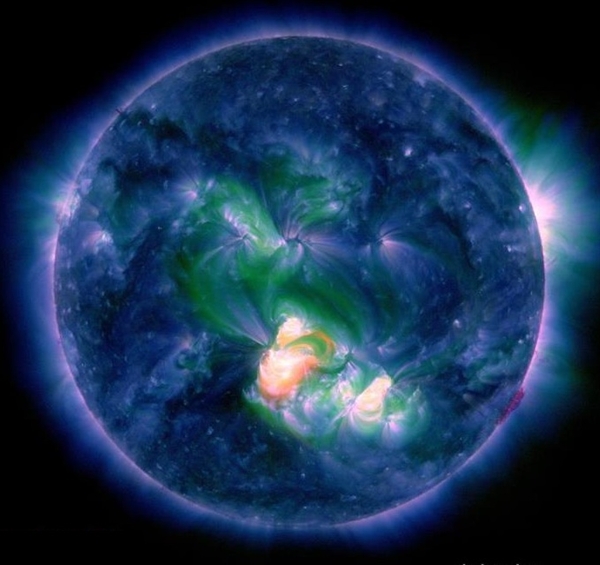 The sun has sent an explosion of electrically charged elements towards the Earth, according to SpaceWeather.com. The Atmospheric Imaging Assembly on NASA’s Solar Dynamics Observatory presented a special color-coded image which clearly shows the cosmological flames thrown off from the sun’s disk in yellow and gold shades. This report simply means that we are in for a double shot of geomagnetic activity early June 9, 2012. However, there is nothing very serious to worry about it as the most evident consequence of the twin M-class blasts should be finely tuned auroral exhibits.

Both of the coronal mass eruptions (CMEs), a massive burst of solar wind and magnetic fields rising above the solar corona or being released into space, initiated in a sunspot region known as AR1504, which turns to face Earth. The rapidly evolving AR1504 has been bombarding off a series of flames during the previous days, including an M1.2-class flare on June 13, 2012 and an M1.5 today. The only positive thing in this massive news is that not even a single flare has moved towards the X-class level, which would have the possible cause of some major interruptions in power grids or satellite-based communication.

SpaceWeather.com provides information and news about the Sun-Earth Environment, predicting that coronal mass eruptions bombarded by those two flares will combine into a single wave of particles that is the output of the Earth’s hitting of the magnetic field around 6:16 a.m. ET on  June 9, 2012.

The National Oceanic and Atmospheric Administration’s Space Weather Prediction Center, on the other hand, adumbrates that the Coronal Mass Eruption will reach its destination “late on 16 June, 2012.” NOAA Space’s prediction center also said that today’s flame flashed a slight radio blackout and it has the capability to create additional such storms.

Polar Regions of the world have a great chance of seeing auroral lights over the weekend, even though the midnight sun will put a curb on viewing in the North.


Posted by Kathryn Jan in Places