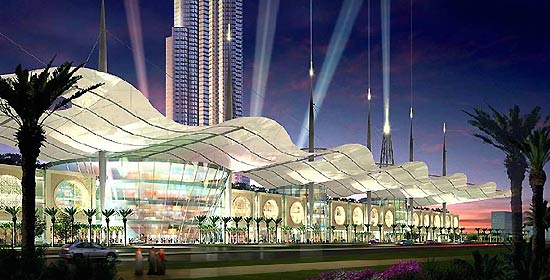 Mall of Arabia is a one-of-its-kind shopping mall that was scheduled to be completed by 2008. However, the opening of this state-of-the-art mall with over 1000 retail shops has run into several delays, mainly because of the global economic crunch that hit the world, including Dubai and its real estate market.

The mall is a planned part of the City of Arabia and will offer much more than your average shopping mall. According to the developers, the aim behind the construction is to provide shoppers with a more relaxed and purposeful shopping experience.

It is claimed that the retail facilities on offer at the mall will exceed that of any other mall in the Middle-East. The plans include space for over a thousand stores and over ten thousand parking spaces. The architect for the mall is Alex Vacha.