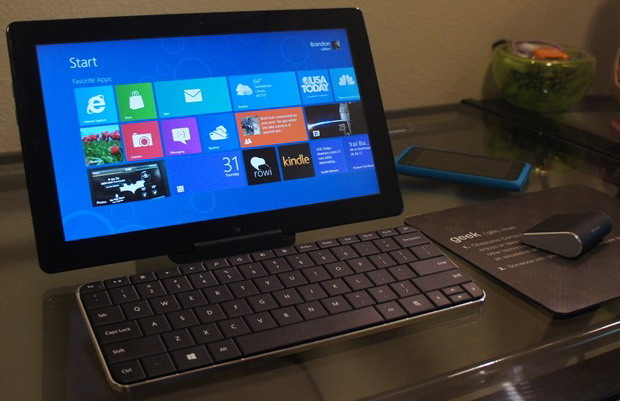 Microsoft has been in the background for quite some time as the technology world has moved forward. With unsuccessful attempts to become a major player in the smartphone market, Microsoft is now trying to learn from its mistakes and not bungle its entry into the tablet market. Along with the tablet, the Washington based company is laying the ground work for the arrival of its much talked about Windows 8 operating system. The new OS is expected to rejuvenate the technology giant’s fortunes in the personal computer Operating System market and also give it a foothold in the tablet market. The company has recently introduced a new mouse and keyboard that have been created specifically for Windows 8 and for use with both a PC and tablet.

The products, which are both wedge shaped, are wireless and utilize Bluetooth to connect to the PC or tablet. The mouse and keyboard are sold separately and can be used with the yet to be released Microsoft tablet, Surface. Microsoft took a page from Apple’s play book when it introduced the Surface and will be manufacturing the hardware itself. The marketing of the device seems to have a lot of people excited and the tablet is expected to be in direct competition with Apple’s iPad. The most distinctive part of the Surface tablet was the fact that it had a magnetic keyboard that acted as a cover for the Surface.

Windows 8, which is expected to be released in October, will run on both the PC and tablet and will be part of the Surface package. The new Wedge Mobile Keyboard will act as a protective cover for a tablet and can also be used to create a stand for it. The interesting looking Wedge Touch Mouse will also be for sale and is small enough to fit easily in someones pocket.

The Wedge Touch Mouse may be the star of the new releases because of it unique look. It has BlueTrack technology that can be used to move the mouse on a number of surfaces. There is also no scroll wheel and instead, employs a touch pad that allows users to scroll both vertically and horizontally.