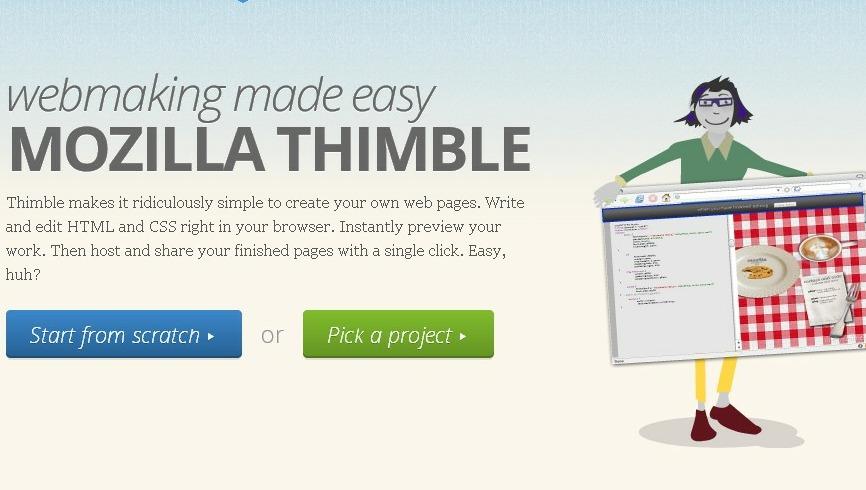 Mozilla has developed some great tools for the internet including their popular Firefox browser. The non-profit is now launching a new project called Thimble that will help novices create web sites. The initiative is part of the Webmaker project that Mozilla put together to help people learn about the web. Thimble is meant to teach beginners about HTML and CSS coding in a web-based code editor. The user will be able to see results of their code right away in a preview screen. Another feature is the ability to publish the web page right away on a domain hosted by Webmaker.

Thimble let users choose to either start a project of their own or choose from projects that have been pre-defined. This puts the novice user at ease because he or she can choose how fast they want to approach their learning. Thimble is different from other web based tools because it tries to teach the actual nitty gritty of HTML and CSS code to the novice. They do not try to make the learning easier by offering WYSIWYG editors. This forces students to grasp the fundamentals and learn actual HTML and CSS code.

The layout of the tool also forces students to dwell into the coding language and understand exactly how each action affects the outcome. That is why the creators of the tool made two panes. The one on the left contains a traditional HTML editor and the one on the right is a preview pane. As a user adds his code they can render it in real time.

The Webmaker project also has several other tools for beginners. The Popcorn tool helps beginners understand how to create and utilize videos online. Popcorn gives videos a very interactive nature making it easier to link with other platforms online including social networks. The XRay Goggles tool is another interesting tool for HTML. It allows beginners to view the code behind a web page so that they can see how developers have created a site.  They can also make changes to see the effects.