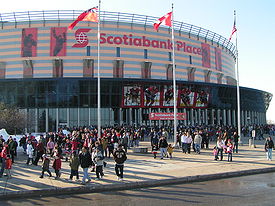 Opened in 1996, Scotiabank Place (formerly known as the Corel Centre) is home to Ottawa’s NHL hockey team, the Ottawa Senators. Beyond this, this facility serves as a multi-purpose facility hosting university level basketball games, large concerts and other entertainment events. The capacity seating is 19, 153 and 20,500 when standing room is taken into consideration (concerts). The building is also home to six restaurants (most of which are only open on game nights) as well as a fitness centre.

Scotiabank Place is located in Ottawa’s west-end suburb of Kanata, approximately 22 kilometres south, south-west of the city’s downtown. Outlined below is the Step by Step guide to the various ways of getting to ScotiaBank from anywhere in and around the Ottawa area.


Posted by Kuljit Grewal in Ottawa