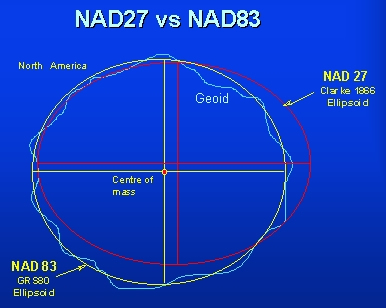 NAD stands for North American Datum and is basically the official geodetic datum that is common in North America. NAD 1927 (NAD 27) and NAD 1983 (NAD 83) are the two kinds of datum that are used in the aforementioned continent. The two geodetic systems differ from each other in respect to their measurements. NAD 27 was based was based on Clarke Ellipsoid, while NAD 83 is based on the Geodetic Reference System.  NAD 83 supports the three-dimensional capabilities of modern position technology, while the NAD 27 is not capable of this. Furthermore, NAD 83 is considered to be far more accurate than NAD 27, as the former uses modern technology, while the latter is based on relatively old technology.