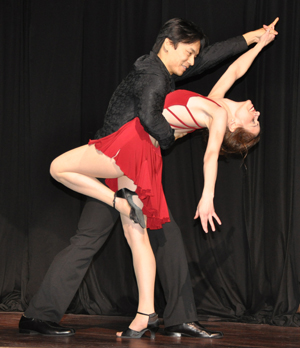 Traditional dances that originated from one culture before spreading across the globe owing to their expressive qualities, the Samba and the Salsa are among the most popular dances in the world. Used by everyone from people at parties to competing pairs in ballroom dancing competitions, the two dances have become huge favourites and spawned numerous variations. Often the two tend to get confused between each other – however, there are a variety of distinguishing features that set the two apart.

The Samba (from the Portuguese word ‘sambar’, meaning ‘to dance in rhythm’) is believed to have its roots in the Brazilian capital of Rio de Janeiro. Its history can be traced back to the migrated African slaves in the 19th century, who started to blend their traditional dances with other popular dances in Brazil, like the maxixe and the polka – thus, the Samba was born. The Salsa, on the other hand, is a popular social dance that has its roots in the Caribbean, and went on to be developed in New York City by Cuban, Puerto Rican, and Dominican dancers in the 1970s.

In present times, the Samba has become an integral part of the Carnival – a popular festival held in Brazil – while the Salsa has gained immense popularity across the globe, particularly in the US, Puerto Rico, and the Dominican Republic.

In addition to origin, the execution of both dances is also different. The Salsa always involves partners, or a group made up of several pairs, while the Samba can be danced either solo, or in a large group of individuals. In addition, the Salsa has a couple of basic, fixed steps that are characteristic of the dance, while the Samba, especially when it is being performed at the Carnival, is frequently danced impromptu. Thus, the Salsa is more structured, while the Samba is more free-flowing.

Finally, the music used for both dances is also different. Given its nature, the Samba can be danced to a variety of music. However, since the Salsa is more fixed, rules dictate that there are certain specific types of music that can, and cannot be played while dancing the Salsa.