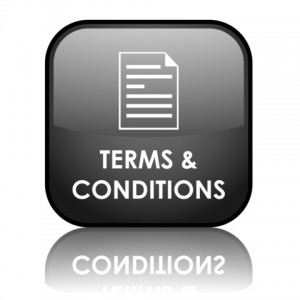 Many people have heard the term ‘Terms and Conditions’, but are barely able to make out what the actual difference is, between the two.

People generally see them as the exact same things, but used in different ways, which is definitely not the case.

When it comes to legal language, there is a reason why hiring a lawyer is always important because not knowing what the terms and conditions are of any deal between two people/parties or more, can result in massive confusion and loss of assets later on in the process.

Terms are basically those things in a contract, deal, offering or purchasing between two or more parties, that the involved people have agreed upon.

These may be one sided or mutual depending on the nature of business, but are usually installed in the agreement with the approval of both parties and are binding after the agreement has been approved by both. It is necessary that the ‘Terms’ should be thoroughly discusses, viewed, reviewed and then agreed upon after all things have been taken into consideration. A lot of times, a party which has intentions of being involved in fraudulent activities will insert terms that are against the interest of the other party, which is why having a legal practitioner assess the agreement is extremely important.

Conditions may seem similar to terms, but they do not come into play like terms of an agreement do. They are exactly what the word ‘Condition’ is meant for, which is something that may come into effect depending on a certain happening, action or breach of contract.

Conditions are not always binding on both parties and can be implied when something specific takes place. Specific necessities that need to be fulfilled before an agreement is signed or even sometimes after, can be termed to be conditions for the parties involved. They may be mutual or even one sided and different for each party involved. Depending on the scenario, both words are used differently.