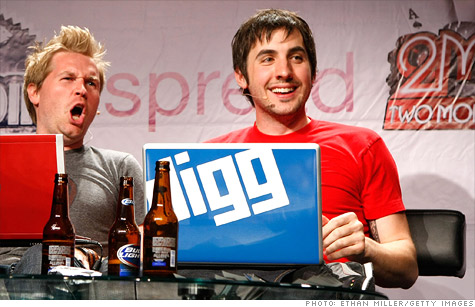 Digg, the social news site, was considered one of the hottest Internet brands just few years back but now, post-decline, it has sold its assets for a paltry sum. According to reliable sources, the total price of the Digg acquisition was almost $16 million. This amount includes the price paid by LinkedIn for Digg’s IP. Digg was once rumored to be acquired by LinkedIn.

Some sources claim that the Washington Post has paid $12 million for acquiring Digg. On the other hand, LinkedIn ended up paying around $4 million for more than 10 different Digg patents including the patent on “click a button to vote up a story.”

The remaining assets have been sold to Betworks. It includes the domain code, data and all the traffic, and the deal is finalized between $500k and $725k.

Betworks revealed in a blog post that it had acquired major assets of Digg. In addition, the company is planning to incorporate the Digg News.me service in order to share articles on iPads, iPhones and by email newsletters.

“The News.me team will take Digg back to its essence: the best place to find, read and share the stories that the Internet is talking about,” Betaworks founder John Borthwick said in a blog post.

“We are turning Digg back into a startup,” the post continued. “Low budget, small team, fast cycles.”

Social news aggregator was founded by Kevin Rose seven years before. The founder took a position with Internet giant Google earlier this year.

Soon after its launch, the website became very popular as an online venue for submitting news stories and voting systems.

According to Chief Executive Matt Williams, over 28 million stories have been submitted to Digg yet.

Before its acquisition, the company raised $45 million in funding from different investors which include Greylock Partners, Marc Andreessen, LinkedIn founder Reid Hoffman and other renowned names.