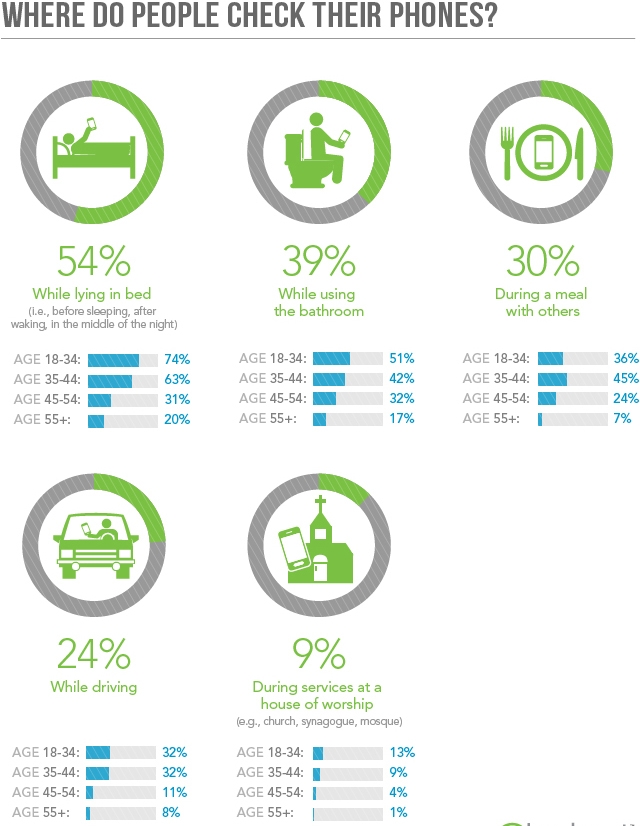 Smartphone security app Lookout recently released a report called the Mobile Mindset Study that highlighted some interesting usage figure of consumers that own smartphones. The study was an eye opener and showed how mobile smart devices have increasingly become a necessary part of many American’s lives. For example, it was revealed that 58 percent of owners check their phones every hour in the US. Interestingly, this phone check is not just at work or school but takes place in bed or the bathroom. Furthermore, 73 percent of smartphones users stated that they would be “panicked” if they lost their device while 14 percent said that they would be “desperate.”

The survey was conducted using an online form and ran from May 8 to May 10. Along with research partner Harris Interactive, Lookout got data from 2,097 adults that were aged 18 years or above.

The integration of smartphones into people’s lives is not the only surprising results of the study. The changing of society’s norms towards mobile use is also apparent. Several years ago, before the proliferation of smartphones, activities such as answering a call in church or restaurant were considered rude but today these activities are common place. 30 percent of people that took part in the study admitted to checking their phones at a restaurant during a meal while 40 percent admitted to checking their smartphones while in the toilet. 24 percent stated that they had the dangerous habit of checking their phones while driving. A much smaller group of 9 percent said they check their phones during a religious service. A whopping 54 percent of users in the survey checked on their phone right before going to sleep, in the middle of the night and after waking up.

The study confirms many warnings from psychologists about addiction to mobile devices and the impact it can have on people. However, with the still continuing increase in smartphone use and the deeper level of interactivity, the trend will probably continue in the near future.


Posted by kevinhanks in Mobile Phones