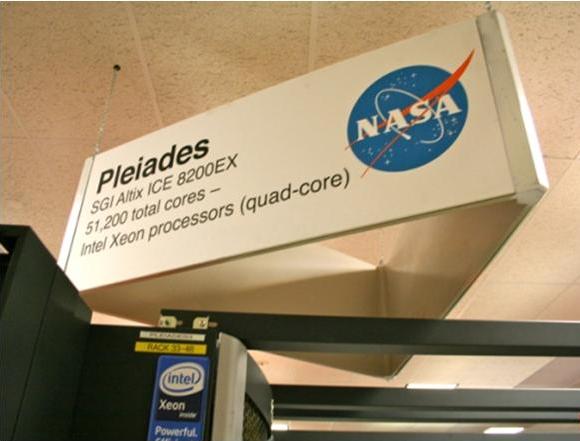 Pleiades, the world’s most powerful and fastest supercomputer owned by NASA has now been upgraded and has received a boost to deal with more complex challenges and vigorously meet the demands of scientists and engineers working for NASA. The computer’s sustained performance was increased up to 14% earlier this month. In simple words, if every individual in the world does one calculation per second for eight hours a day, it would take almost 379 days to complete what this supercomputer can do in just 1 minute.

Pleiades is usually used for modeling, simulation and analysis of different projects in aeronautics research while also helping in experimental analysis of future space exploration vehicles. This super giant computer is located at the NASA Advanced Supercomputing (NAS) facility at Ames Research Center in Moffett Field, Calif. It was installed in 2008, and has been upgraded eight times.

“As we move toward NASA’s next phase in advanced computing, Pleiades must be able to handle the increasing requirements of more than 1,200 users across the country who rely on the system to perform their large, complex calculations,” said Rupak Biswas, chief of the NAS division at Ames. “Right now, for example, the system is being used to improve our understanding of how solar flares and other space weather events can affect critical technologies on Earth. Pleiades also plays a key role in producing high-fidelity simulations used for possible vehicle designs such as NASA’s upcoming Space Launch System.”

At the moment, NASA scientists have counted on Pleiades to produce the Bolshoi cosmological simulation to help elucidate how galaxies and large-scale structures of the universe have evolved over billions of years. Scientists have described it as the largest simulation of its kind up till now.


Posted by chris_ellsbury in Computer & Internet