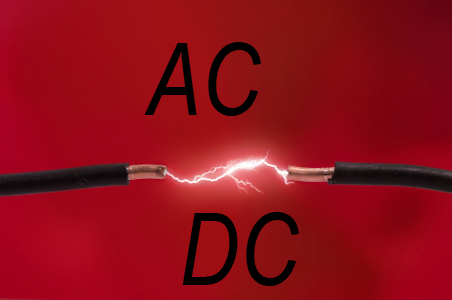 Before we differentiate between the Alternating and Direct current, we need to sort out the basic concept of electricity and how it is generated.

Electricity is a form of energy which is produced by inducing the flows of electrons in a conductor, such as the copper wire. When this flow of electrons is in a single direction along the wire, it is referred to as the Direct Current (DC). However, when the flow is such that the movement of electrons occurs in both the directions, it is called Alternating current (AC).

There are many differences between AC and DC current.

The main difference is related to the amount of voltage each current can support. Direct current devices like batteries can only produce a specific voltage and that too doesn’t have the legs to travel far, before it gets dissipated. Alternating current voltage on the other hand, can be varied according to the requirements. During the transmission through the electric lines, this voltage is enhanced significantly to ensure that there are no power losses and then as the current reaches the consumer, it is stepped down so that it can be used in industrial and home appliances.

The stepping up and stepping down of the alternating current voltage is done by using transformer, which cannot be used when we are dealing with direct current.

There are no fluctuations in the direct current voltage output and thus the quality of energy is higher as compared to the alternating current. The operational life of DC equipment is also higher as there are lesser vibrations.