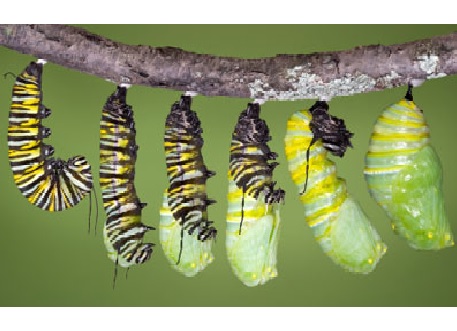 When it comes to entomology many of us talk ab0ut cocoons and pupa interchangeably. These are however different. This difference can be well understood if we see the whole process of metamorphosis in a little detail.

We know that there are four distinct stages during the metamorphosis of an insect. When the egg is transformed into a larva; it resembles more like a worm. This worm like larva feeds upon leaves in order to grow into a pupa, but when it turns into pupa it does not eat or move too much, and it is during this stage that major body changes occur. Since the pupa is vulnerable and the major processes are developing, so now is the time that this pupa needs to protect itself from predator and other environmental threats. As a result, the pupa wraps a casing around itself in order to protect itself from the outside world. This casing is what we call the cocoon, which is produced from the two glands inside the pupa – pupa safely resides inside this cocoon.

It must be noted that pupa is the development stage while cocoon is not. On the third stage of metamorphosis the cocoon is formed in order to protect the pupa during its development. On the other hand, pupa is secreting different hormones in order to develop into an adult insect.

In addition to this, it must also be noted that the cocoon once formed does not undergo any changes while the pupa is continuously undergoing major developments. It is from the pupa from which the adult insect emerges out and not from the cocoon. The cocoon is nothing more then a protective casing that sheds off when the insect fully grows and reaches the final stage of its development.

Although pupa does not move too much but it does not mean that it is dead. The pupa is a living thing inside the cocoon; as the pupa breathes while the cocoon only lets the oxygen in.

The structure of cocoon is also different. The cocoons architecture is such that it not only makes the pupa comfortably grow into an adult insect but also lets it escape out from it with ease. There might be pores on it, while in some other insects there might be a weak lining that lets the adult insect easily break it and escape out.

Different species of insects have their own way of coming out of cocoons. Many factors influence when to emerge out of the cocoon. Sometimes when the temperature is not favorable then it may take the adult insect longer to come out of the cocoon.