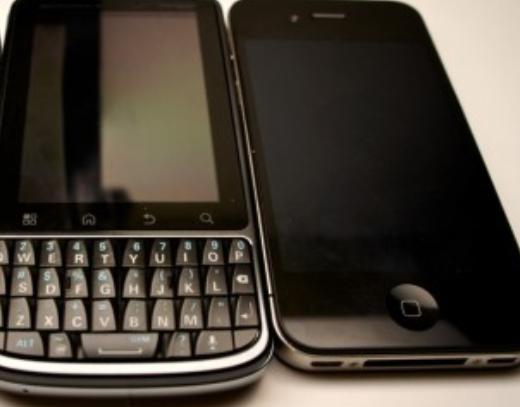 Motorola Pro and iPhone 4 are two completely different phones in relation to both the hardware and the software. The major difference between the two is their operating systems. Motorola Pro has Android 2.2 installed in it, while iPhone 4 uses iOS. Both the operating systems allow you to install a number of applications and both have refined interfaces. The iPhone 4’s operating system can be said as more user friendly. However, the users of Android get more freedom compared to those of iOS.

Another major difference between the two is the presence of QWERTY keyboard in Motorola Pro. The keyboard makes it really easy for the user to type long messages. In the meantime, it takes too much space on the phone. That is the reason why Motorola compromised on screen size to give some more space to the keyboard. Motorola Pro has a 3.1-inch display, which is quite smaller than 3.5-inch display of the iPhone 4.

The iPhone 4 scores more on the quality of the screen, as it uses retina display compared to the HVGA resolution offered by Motorola Pro.

Motorola Pro also loses to internal 16 GB memory offered by iPhone 4, as it only comes with an 8 GB microSD card. However, Pro takes the lead when you replace the 8 GB card with a 16 GB or 32 GB microSD card, as iPhone 4 does not offer the memory slot facility.

Both the Smartphone have 5 megapixel cameras, but the difference is created when you compare video recording capabilities of the two. You can record an HD quality 720p video using iPhone 4, while Motorola Pro can only capture with 480p quality.

When it comes to front camera that is used for video calls, Motorola does not provide any such facility. On the other hand, iPhone has a front camera, which you can use only when you are connected to the internet via WiFi.