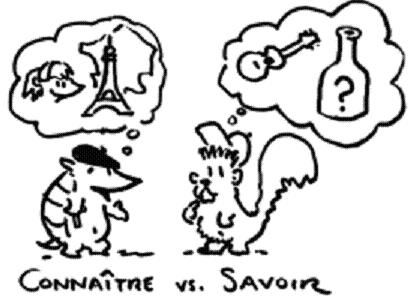 Learning a new language is never easy. While it may not be too hard for you to learn and retain new words, you are bound to find yourself in deep water once you reach the grammar part, as that is where a person’s grasp on a certain language begins to get tested.

French is no different to other languages when it comes to challenging grammar. Two of the many verbs that a student sitting in a French class is bound to struggle with are savoir and connaitre.

Since both the verbs generally mean the same thing, i.e. to know, it is not uncommon for an English speaker to become confused when it comes to using them correctly.

Learning the difference between the two verbs is imperative if one wishes to speak fluent and grammatically correct French.

The core difference between savoir and connaitre lies in their true meaning, which eventually affects their usage.

Savoir can possibly have three meanings. It can mean “to know a fact”, “to know by heart” or “to know how to do something.”

Connaitre, on the other hand, can possibly mean two things, “to know a person” or “to be familiar with a person or thing.”

To elaborate more on the aforementioned differences in the meanings of the two verbs, let us consider a few examples.

“Je sais qu’il l’a fait.” or “I know he did it.” Here, a person is expressing his knowledge of a fact, thus savoir needs to be used here.

“Je sais cette nouvelle (par cœur).“ or “I know this short story by heart.” Here, a person is claiming to know a certain poem by heart. Thus, the appropriate verb to use here would be savoir.

“Je connais Pierrette.” or “I know Pierrette.” Here, it is clear that a familiarity with a person is being expressed. Thus, connaitre is obviously the correct verb in this situation.

“Je connais bien Toulouse.” or “I know / am familiar with Toulouse.” A familiarity with a thing is being expressed in this sentence, thus making the use of the verb connaitre appropriate here.