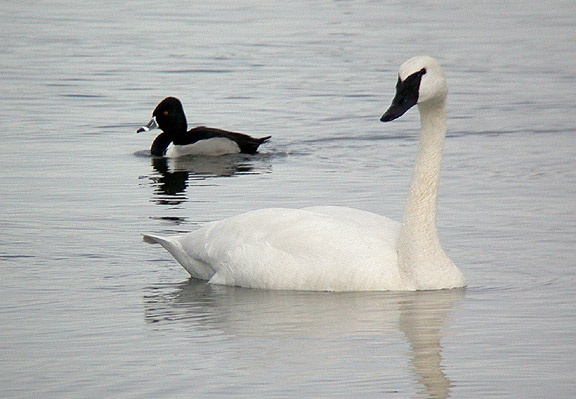 There are a lot of general misconceptions about swans and ducks, as people believe they belong to the same species. Some even believe that they are the male and female versions of the same kind – however, the reality is far from it.

Although these aquatic birds share some similarities, such as the fact that they both belong to the Anatidae family, they are different in many ways, and have got certain distinct characteristics which cannot be ruled out when making a comparison between the two. There are quite a few apparent differences between a swan and a duck, so if you are able to find these dissimilarities, you will be able to distinguish between the two species quite easily.

A major difference between these two aquatic birds is that swans are the largest birds in the Anatidae family. No other member of their group is larger than them. Their wingspan is more than three metres, which is quite large. Moreover, their overall length can go up to one and a half metres.

Compared to swans, ducks are the smallest of their kind in the Anatidae family. Their length is not more than 30 centimeters. So, you can clearly tell the difference between a swan and a duck, as the former will always be significantly larger than the latter.

Other than the length, both these birds are also different in terms of their weight. Since swans are larger in size, they naturally weigh more than ducks; an adult swan, for example, can weigh up to 15 kilograms.

When you look at the necks of swans and ducks, you will be able to note another clear difference. The former has got a longer, more graceful neck, which appears to be shaped like a bent pipe. On the other hand, ducks don’t have much of a  neck at all, and it often seems like their heads are directly linked to their bodies.

Interestingly, most swans are herbivorous, but some of their kinds can be omnivorous too, depending on what sort of food is available in abundance. Compared to swans, ducks can eat pretty much anything, as they are omnivorous birds.

Ducks are more diverse as a species, and you can find them in different forms and colours; on the other hand, swans are mainly found in hues of white or black.