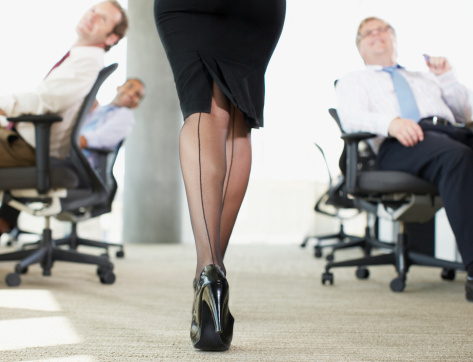 In modern times, women have gained the confidence to show-off their legs in public and fashion involving tights and stockings has played a huge role in giving them this confidence. Motivated by huge profits, tights and stockings manufacturing companies have put in a decent amount of research and effort into making the two garments more comfortable than ever.

The continuous efforts of manufacturers to make both tights and stockings comfortable and appealing have made it tough for some people to differentiate between the two.

Confusing tights and stockings to be one and the same is hardly acceptable because they are two entirely different garments.

One of the primary differences between stockings and tights is that the former is typically worn at a formal occasion, whereas the latter is considered somewhat informal. You would see a woman wearing stockings with skirts, blouses or cardigans in offices. On the other hand, you would normally see women in tights when wearing casual slacks or jeans is not considered very appropriate.

Another thing that underlines the difference between stockings and tights is that the former are not as warm as the latter. It is because of this reason that you would not typically see a woman walking around in stockings in winters. Tights, which are significantly warmer, will be much more common in females. Stockings have a thinner fabric weave than tights, which make them an ideal choice of leg-wear in summers.

Stockings are normally made from nylon or silk, whereas tights are typically made from cotton, with elasticised thread threaded throughout the weave in order to make the material cling to the legs and highlight their shape.