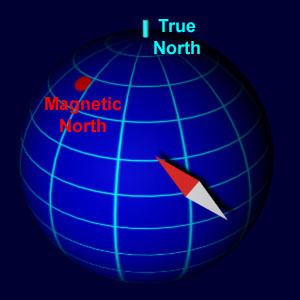 When creating a map, it is very important to know the difference between true north and magnetic north, because they both come into the equation when determining the distance of a particular location. While there may be some similarities, the differences between the two are huge.

Being land based is the major difference which separates true north from magnetic north as the latter is not land based. True north will always remain consistent and the same, while magnetic north is flexible and can change depending on your location.

Constellations can also help in finding out where true north is, while such methods cannot be applied to find the location of magnetic north. A major way to figure out the location of true north is the use of the North Star, which is used by travelers in seeking out true north. While on the other hand, a compass needle pointing north is the way to find out where magnetic north is due to the pull.