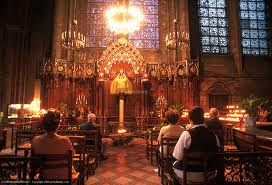 Christmas is a major religious event for all the Christians residing in different parts of the world. Folks living in the capital of France, Paris also celebrates Christmas in the traditional way as the city has huge population of Christians. However, they all belong to different sects of Christianity and follow diverse code in celebrating the birth of Christ. The most prominent sect amongst them is Roman Catholic, whose believers are found in vast majority and after it comes other sects such as Coptic, Lutheran, Orthodox and Pentecostal. Each of these sects follows their own rituals and practices it in their own churches. If you are looking for a specific denomination church to attend to Christmas prayers in Paris then, guide given below may remain helpful in your search.


Posted by Linda Barbra in Paris