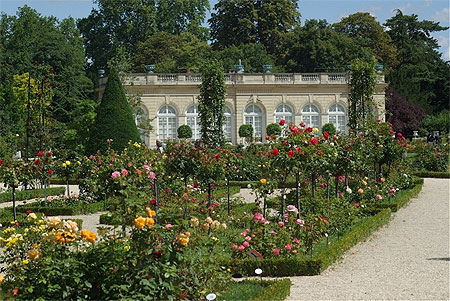 Parc de Bagatelle is one of the four beautiful botanical gardens in Paris. It is located in the heart of the Bois de Boulonge, the largest park in Paris.

The interesting story behind the construction of the garden is the main cause of attraction for the visitors. Parc de Bagatelle was constructed in response to a crazy bet between Marie-Antoinette and Comte d’Artois on September 20, 1777. Marie-Antoinette challenged his brother-in-law that it is an impossible task for him to build a castle in three months. However, D’Artois took it as a challenge and hired Jean-Francois Belanger, the famous French landscape architect of that time. Belanger stayed up, designed site plans in just one night, and completed the whole project in just sixty-four days. Eight hundred workers labored tirelessly, day and night and built it in an English-Chinese style popular as a counter trend to the rigidity of 18th century French gardens. The garden was then handed over to Paris government in 1905. Since then, this picturesque park is open all year for the visitors.


Posted by Kathryn Jan in Paris