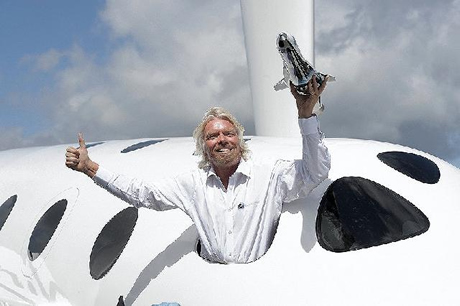 UK entrepreneur Sir Richard Branson has made it public that him and his family will be the first travelers of a space tourism project which he is going to launch in 2013.

Branson said that it will be the most historic moment of his life and his family. The passengers include his son Sam and daughter Holly who will fly into space on the SpaceShipTwo (SS2) aircraft along with 529 other tourist including Ashton Kutcher, Brad Pitt and Angelina Jolie. It will be a two-hour flight and cost around £128,000. The company said that six hundred people are likely to join the trip in the first two years of service.

“Going into space is a hard business. It keeps my mind buzzing,” Richard said.

The company with the name of Virgin Galactic is working on a sub-orbital space flight program and has collected deposits for the two-hour flight, which costs $200,000, from 529 interested applicants. However, commercial flights are expected to start in 2016.

The company’s spokesperson hasn’t confirmed whether Brad Pitt and Angelina Jolie are planning a space flight or not.

“Virgin Galactic’s goal is to revolutionize the way we get to space,” Branson said in a statement. “I’m immensely proud of what we have already achieved as we draw near to regular suborbital flights on SpaceShipTwo.”

Virgin Galactic CEO George Whitesides said that the demand has been increasing day by day for a satellite launching service in spite of difficult economic conditions.

“Miniaturised satellite components and constrained budgets are driving commercial clients, academic users and government agencies all to clamour for an affordable, dedicated launch vehicle,” he said.

The space flight will commence from a station in New Mexico. The space ship can take maximum six travelers and two pilots. The travelers will float around the cabin for a few minutes because of weightlessness.