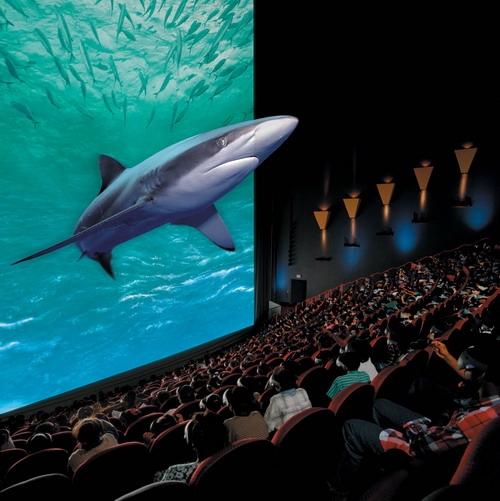 There’s good news for those movie lovers who are in an urge to find something more thrilling and exciting after getting bored by 3D cinema houses. CJ Group, a Korean company, is bringing the 4 D technology blast into 200 cinema houses. This entertainment based technology will definitely give you that adrenaline rush that you have been craving for, making you jump out of your seat (figuratively!).

After having 4D screens, there won’t be many people found yawning in the cinema or idly starring at the screen in an attempt to pay attention to the movie.

Though when 3D was introduced for the first time people were definitely astonished by its awe-inspiring technology and thousands of people who stopped going to the cinemas changed their minds and began to frequent them. But it eventually started to look like they wanted more now.

After having a tremendous experience in Asia and Mexico, the Korean company is all set to hit 200 cinema houses of US with their high-end technology of 4D.

In order to keep the businesses running smoothly and successfully, the 4D technology will bring life to cinema houses. Cinema screens will no more remain just a run of the mill movie theater.

This extra D will definitely take your breath away by bringing your senses into play; moving and thumping of seats, artificial smell of gunpowder or flowers and the feel of artificial rain, lightening and wind will endow you an experience worth remembering.

Though the technology is attracting theater owners but they are still apprehensive because of the costs. They might have to pay half of the $2 million cost in order to retrofit each cinema house. On the other hand, CJ Group states that the popularity of 4D will quickly recover the cost just as it did in Asia and Mexico.

This 4D technology will definitely breathe a new life into the experiences of of cine-goers, improving the whole ambiance and bringing it much closer to real life.


Posted by aimee hudson in Cinemas