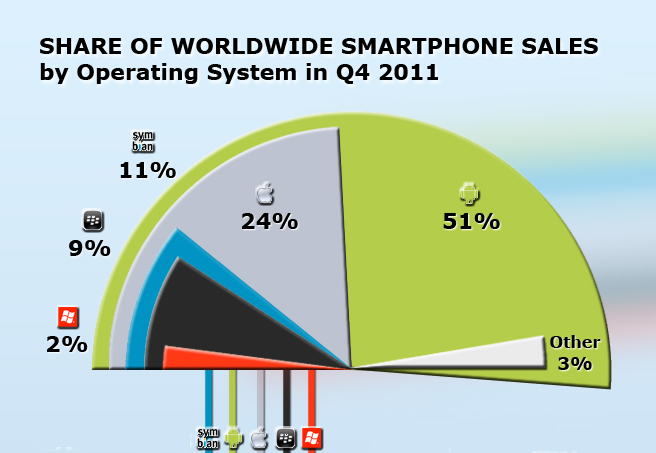 International Data Corporation (IDC) has revealed that Android and IOS have grabbed hold of 82 percent of the smart phone market. This is bad news for Research in Motion’s (RIM) Blackberry which was at the top of the heap only a few years ago.

According to IDC, Android is king of the hill with a market share of 59 percent during the first quarter as Apple’s IOS came in second with 23 percent. Third place was taken up by Symbian and Blackberry found itself in a dismal fourth place with 6.4 percent.

The data produced by IDC shows an interesting picture which should send the alarm bells ringing at some companies. For one, Blackberry’s slide seems to have no bottom and their further loss of market share will be giving RIM executives sleepless nights. For newer players like Microsoft Windows Mobile, grabbing market share from the strong grip of Android or IOS looks like an uphill battle.

One thing in favor of Blackberry is RIM’s BlackBerry 10 platform which the companies expect to put it on the comeback. This might sound great in the board rooms of RIM but real time data seems to be painting a picture that is very undeniable. Android and IOS own the mobile market and competitors will need to come up with something extraordinary to beat them out.

Windows 8 is being hyped as one such operating system that will help Microsoft crack the market but the software giant’s only manufacturer is Nokia. If the team at Microsoft wants to make a run for the title they will need to take a page out of Googles playbook and get as many manufacturers using their operating system as possible. However, with the current offering from Microsoft having underwhelmed consumers and phone makers, it seems the trend will be in favor of Google and Apple in the forseeable future.