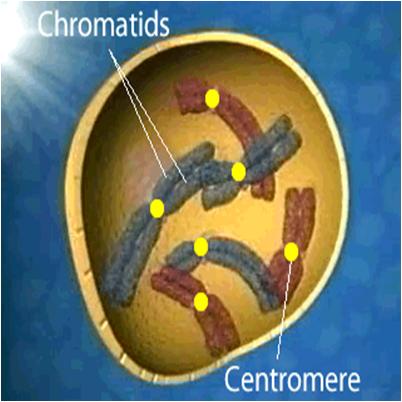 Biology is a complex subject with even more complex terminologies. Centromere and centriole are two of thos terms. Here is a simple breakdown of what these two words mean and how they relate.

Centrioles are cylinder or barrel shaped organelles or small function-structures, present in the majority of eukaryotic cells – excluding some fungal and plant cells. These specialized organelles are so small in size that they cannot be seen without an electronic microscope. They play very essential role in cell division in organisms. Most animals consist of two pairs of centrioles, with quiet attractive and beautiful shape. Each pair is termed as “Centrosome,” with one centriole perpendicular (vertical) to the other. During a cell division, the centrosome replicates itself into two daughter chromatids, which then move to opposite ends of the cell. The main function of centrioles is to help in both mitotic and meiotic cell divisions in animals.

Centromere, on the other hand, is a central region inside the centrosome where the two sister chromatids are in very close contact. The moment when a cell division takes place in an organism, the spindle at the centromere assists a chromosome to get attached to it.

Centrioles are not easily seen during normal times. However, they become slightly prominent during the mitotic or meiotic cell divisions. The centrioles, in turn, are made up of nine groups of microtubules, nicely arranges in a specific order. They form a spindle at centromere during the cell divisions, to which the chromatids link together.