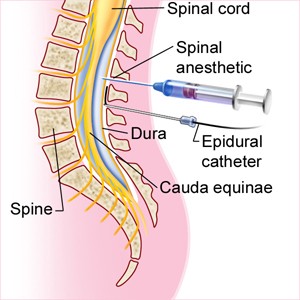 General anesthesia is very important when performing surgery in order to basically knock them out so that the patient does not feel anything. But in cases of pregnancy, it is not favourable to administer an expecting mother with anesthesia due to the harmful effects it could have on the delivery.

When talking about a caesarean section during delivery, it is highly recommended by doctors that either spinal or epidural anesthesia is administered to the woman. This basically allows it to numb certain areas and ultimately, ease the pain being experienced by her.

These types of anesthesia are being preferred over the general type in many countries now because of the reduced risk involved. While epidural and spinal anesthesia is injected in different places of the body, both the nerves are located in a sort of sac containing the cerebrospinal fluids.

The main difference between an epidural and spinal anesthesia is the fact that the former is administered outside of the sac, which is known now as the epidural area, while the latter focuses on the doctor administering the anesthesia directly into the sac. The time for them to become effective is most definitely not the same as well because it takes time for the body to react to the anesthesia given in different areas.

Ultimately, the result of administering the two types of anesthesia is the fact that the lower part of the body will become numb and can take anywhere from 10 to 20 minutes to see the desired effects. The risk associated with the two also varies, but the chances are very minimal as epidurals can be considered slightly more risky than a spinal.