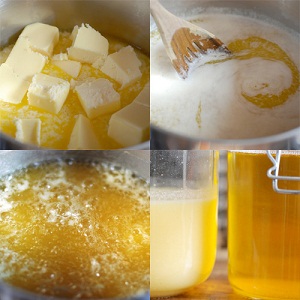 Ghee and butter are chemically the same. They are both glycerides of saturated higher fatty acids and are rich in calories and cholesterol. Both ghee and butter therefore, may appear the same but have some major differences in preparation methods and use. Ghee is more commonly used in Asian countries since centuries and is a very important part of diet. For those with deep interest in cooking and culinary arts, it is important to know the difference between these two. Our step by step guide below discusses the main differences between them so that you have an authority over the topic.

Ghee is an advanced form of butter. It is made by heating the butter to a temperature where the water and milk solids are removed from the butter, leaving pure fat. Therefore, ghee is also termed as ‘clarified butter’ by some. However, many others consider that there is a slight difference between clarified butter and ghee. That difference is the simmering of ghee in some cultures to add a nutty flavor to it. So any ghee which is not simmered still is clarified butter.

There is a difference in cooking purposes. Ghee is considered as one of the best oil options to cook, bake and fry in. Because it is made at a higher temperature than butter, it has a higher smoke point of 450F which is higher than that of butter (350F). Therefore, it is preferred over butter for sautéing. When you fry with butter, the milk solids in it precipitate and cause burning. The nutty flavour of ghee also add to the taste of the food and is particularly captured by the Indian cuisines. It is rich and flavorsome and one tablespoon of ghee can do as well as three of butter and oil.

Ghee also has a longer shelf life than ordinary butter because it has very low moisture content. The only condition is to store it in an airtight jar, free from contaminants. Unlike butter, it does not need to be refrigerated for up to a couple of months. It can sustain in the refrigerator for over a year.

Apart from the cooking benefits, ghee is also a home remedy for treating burns and other wounds. It is applied to such wounds to encourage faster healing and prevent any marks. The healing properties of ghee are very famous in Asia, especially for ghee varieties that have been preserved for years. The older the ghee, the more therapeutic powers it has.