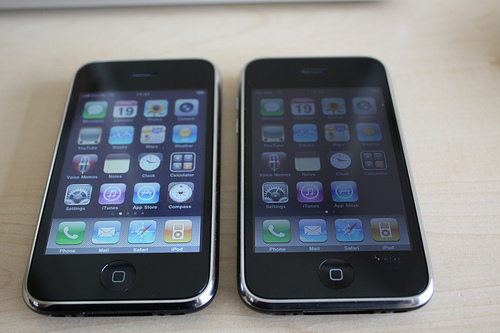 Although there is no significant visible difference in shape and size, Apple launched iPhone 3GS months after the 3G version with some enhanced features. The American multinational company leapfrogged Samsung and Nokia in the race for Smartphones after launching the marquee model.

3G and 3GS were presented to the market in white and black colours only. One of the differences between the two models is the back cover on which the California-based company has written the type of model right beneath the camera with silver text.

There is a minor difference between the two models with regards to the total weight. The earlier model carries 4.7 ounces weight while the 3GS model weigh 4.8 ounces.

iPhone 3GS has a fast processor as compared to the earlier model i.e. 600 MHz compared to 412 Mhz.

Apple Inc. had work on the camera of the new model after complaints from their respective users. The company has installed a 3 megapixels camera with video recording. iPhone 3G lacked video recording and has a 2 megapixel camera.

iPhone 3GS has voice control and magnetic compass while the previous model lacked both the facilities. The digital compass helps the user in locating which direction they are facing while using Google maps.

Another important aspect that almost every mobile user considers before making a purchase is the mobile’s battery. There is little arguing to the statement that Apple have significantly improved battery life as compared to the previous model.

Nowadays, users like to record more videos, movies and songs into their phones. So, the technology giants have come up with a plan and succeeded in providing 32 GB storage in the later model.

Related: Playing an iPhone 3G Through a Car Stereo