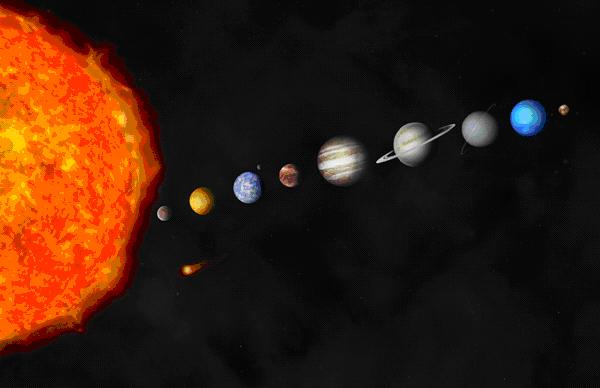 Planets and moons are both heavenly bodies that revolve around a centrally located primary object with a specific angular velocity and centripetal acceleration. The basic difference between a planet and a moon is that the former revolves around a star or stellar remnant, while the latter is a natural satellite that revolves mostly around a planet, and in some cases around large asteroids.

Planets revolve around a star in specific, elliptical-shaped paths called orbits. The shape and size of the orbit in which the planet revolves around the star is determined by its own gravity and the gravity of the star.

A planet has the ability to clear its neighbouring region by absorbing the debris around it. However, larger pieces of debris, that have their own gravitational force, resist merging with planets, and either become natural satellites of the planet or just fly away into space.

Moons on the other hand, do not have the ability to absorb other debris or to make other heavenly bodies revolve around them in an orbit. Furthermore, Planets only orbit around centrally located stars, while moons orbit around planets as well as their stars.

One cannot differentiate between a planet and moon on the basis of size. A moon orbiting around a bigger planet can be larger than several smaller planets. For example Ganymede, a moon of Jupiter, and Saturn’s moon Titan, are bigger in size than the first planet of our solar system, Mercury.