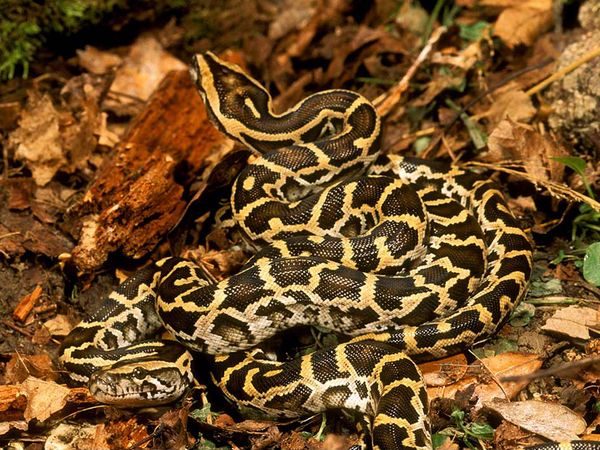 Notorious reptiles with fearsome reputations, both pythons and anacondas are gargantuan predatory snakes with ferocious appetites. However, while many might be inclined to just group them together as gigantic, deadly snakes, both creatures are very different from each other in a number of ways.

Despite the fact that they are both cold-blooded and carnivorous, pythons and anacondas belong to different families. The anaconda is part of the Boa family, and is native to South America and the Amazon basin. The python, meanwhile, belongs to the Pythonidae family, and is generally found in the thick forests of Sub-Saharan Africa, South Asia, and South East Asia.

In addition to having different origins, both snakes also have different habitats. Being fairly aquatic, and excellent at swimming, anacondas tend to live in rivers, swamps, and marshes. They are specifically adapted to this sort of habitat, as their eyes are located on top of their heads, allowing them to keep an eye on prey while hiding out under water. Pythons, however, prefer to hide out in forests where they can wrap themselves around tree trunks, or perch on trees. They have keen night vision, which allows them to trap helpless animals that blunder about at night.

Both snakes are famous for different reasons – pythons are renowned as the longest snakes in the world, and can grow up to 33 feet or more in length, while anacondas are the heaviest snakes in the world, growing up to 550 pounds or more, with a diameter of 12 inches. Pythons live for up to 35 years, and give birth by laying eggs, while anacondas live only 10 years, and give birth to live baby anacondas.

Given their large size, anacondas are not particularly fussy about what they eat, and will swallow anything from crocodiles to jaguars. Pythons, however, tend to be more choosy, preferring to single out particular mammals and birds as prey. When it comes to technique, pythons kill by asphyxia – they wrap themselves around the prey and suffocate it to death – while anacondas tend to bite their prey first, and then drown it in the water for good measure.


Posted by morocco-foucault in General Knowledge