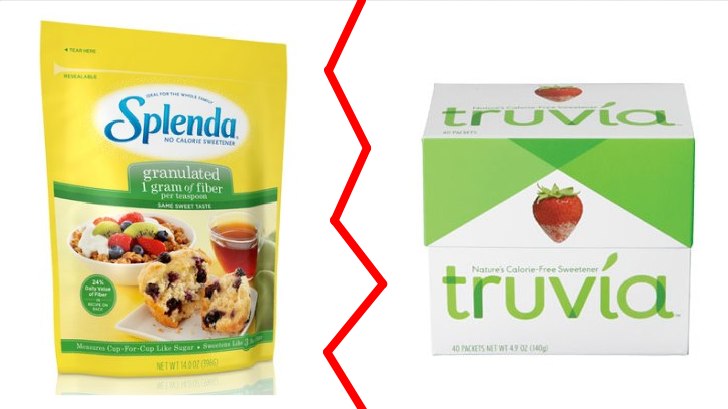 Diabetic patients are strictly not allowed to take sugar in any form. Many companies have come up with an alternate to sugar by producing artificial sweeteners. These sweeteners taste just like real sugar but their composition doesn’t affect your diabetes at all. Some manufacturers use natural herbs to produce sweeteners while others derive them from sugar. In both cases, the artificial sweeteners are equally effective and taste alike. These low calorie sweeteners are also highly liked by diet conscious people who intend to lose weight. You can find numerous brands of artificial sweeteners in the market but every product has certain distinctive properties which separate it from the rest. Truvia and Splenda are among the most popular sweeteners being used throughout the United States. Albeit their core purpose is the same, you must know the differences between these two products so you can purchase them according to your requirements.

Truvia is an artificial sweetener made from ‘stevia’ (a very sweet herb originally grown in South America) and used in a wide range of foods and beverages. It contains very low calories and is officially manufactured by The Coca-Cola Company since 2008. Truvia is distributed and marketed by Cargill Inc. as a tabletop sweetener and food ingredient. Since the main content of Truvia is stevia, it is recognised as a natural sweetener. Other main ingredients of Truvia are rebiana, erythritol and natural flavours.

Splenda is the top-selling sugar substitute in the United States, holding 60 per cent of the entire market share. It is basically a sucralose-based artificial sweetener derived from sugar and is manufactured by the British company, Tate & Lyle. Splenda was introduced in the United States in 1999, when Tate & Lyle collaborated with the American company, Johnson & Johnson, and it has been the best seller for the past many years.