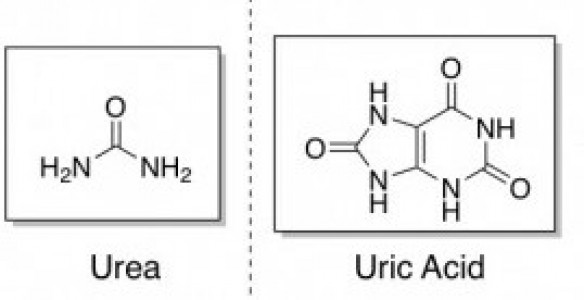 Many people confuse urea with uric acid; they are, in fact, two distinct chemical compounds that differ a  great deal in their chemical composition, although their uses overlap to some extent. Urea is the waste product of the human body, which is excreted in the urine, along with several other toxic substances. The human body produces a number of toxic substances during the process of metabolism, and it is very important to remove these from the body, but only after converting them into less toxic products. The kidneys are the main excretory organs in the human body, which filter and excrete the excess and unnecessary substances from our bodies in urine. Besides the kidneys, our skin also plays a key role in excreting urea, through sweat.

Uric acid is also a waste product of the human body, but it is the final product in the urine metabolism, so it is always excreted with the urine through the kidneys. The skin, meanwhile, has nothing to do with the excretion of uric acid. Human beings excrete urea and uric acid in liquid form, while the uric acid excreted by birds and reptiles is usually solid. Water loss with urea is much higher than the water loss with uric acid.

Excess levels of urea in human blood point towards the inefficiency or failure of the kidneys. The excess of uric acid in the body results in the formation of kidney stones, and also affects the efficiency of the kidneys; in some cases, this can also lead to kidney failure. A prolonged deposit of uric acid is more damaging for the human body tissues as compared to a deposit of urea.