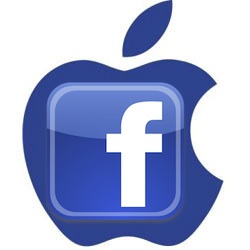 “STAY TUNED” was repeatedly said by CEO Tim Cook at D10 when he was asked about the new Apple collaborations with Facebook. Yes, he literally meant it.

In the coming time, you will be using your Facebook account on Apple TV, or you might be viewing your iTunes or iPod activity auto-shared to Facebook. Both these big tech giants have a common enemy, and this deal will eventually give them boosted revenue and better ad targeting.

“Facebook is a great company.” Cook said, “And the relationship is solid. I saw Sheryl (Sandberg) earlier outside. We have great respect for each other.”

Cook didn’t say anything like, “there’s some thing in the works,” or “we’re excited about partnering with Facebook,” – he was continuously saying “stay tuned.” This is similar to the gimmicks that have been used by old TV shows just to convince you to keep watching the shows. It was also expected that Apple may launch an SDK for its Apple TV app platform at WWDC; so the whole situation is leading some analysts to think Facebook and Apple are collaborating to introduce Facebook on Apple TV.

Facebook has a huge collection of photos, with 250 million posted every day, and it also enables users to upload high resolution images that ultimately look great on a big screen. Just imagine the images transferring from your news feed and becoming a slideshow on your Apple television!

Facebook is working hard to generate revenue on small mobile screens. But on the other hand, if we have a Facebook TV, it could be a more natural place to display ads. Facebook TV is the best solution for advertisers’ problems who want a bigger, flashier ad format.

The new Facebook app can certainly become hot cake for Apple’s new TV hardware. Facebook can take over the television while Apple can work up on its own brand through Facebook’s presence on its televisions, so this partnership is likely to be formed sooner than later, if not already!

It has already been rumored that Apple is planning to include “Like” buttons to iTunes and the App Store, but what if if they go beyond that and make content sharing automatic?

Spotify has been extremely successful with Facebook Open Graph auto-sharing because it doesn’t include any influential recommendations like the ones from friends. In the Facebook news feed, you will be shown whatever song your friend listened to. If you want to listen to the same song, then just click it and make an account, listen to the song or as many. But there’s a catch here; if you get tired of the ads then start paying Spotify to get rid of them.

Apple can introduce the same thing by integrating Open Graph auto-sharing into iTunes on both, the desktop and mobile. If users opt in, it is expected that they would eventually attract referral traffic and purchases.

In case Apple actually wanted to increase App Store profit, it could develop app downloads trigger auto-shared stories. This eventually means giving up on Ping, but Apple should degrade itself, and realize it doesn’t get social and can’t even recreate the friend graph, and start creating Facebook into its content stores. Ultimately, Apple could influence Facebook’s EdgeRank news feed while making algorithm to find out your best friends, and which is something not expected by Apple to make. It would make sure the news feed you would be about all the activities of your closest friends.

Privacy controls, particularly simply activated “private mode” on any source of auto-sharing would be a plus, but when looking the success of Open Graph music, video and news reader apps, it is expected that many people would be comfortable sharing their iTunes and App Store Activity. Previously, Apple has extremely strict privacy policies, but now it comes up with a solution that social and privacy concerns should be a bit relaxed.

However, Apple just can’t force people into a Facebook data permissions step, or users could click anonymously, get shocked by what is shared, and a reaction could ensure. iTunes and Open Graph’s opt should be clearly described. Facebook can also take huge benefits from iTunes auto-sharing.

The collaboration between Facebook and Apple can be a huge punch to Google, who is competing with these two giants through its Android and Google+. This will eventually benefit 900 million people to easily find out iOS apps than Android apps. In case, it will not be a successful, then perhaps Google will make strong ties between Android and Google+, circulating same stories to its own social network.

Hence, if Apple gets profit its app developers and content creators will be in profit as well. On the other hand, Facebook gets content and ad targeting data and this ultimately gives Google a tough time.