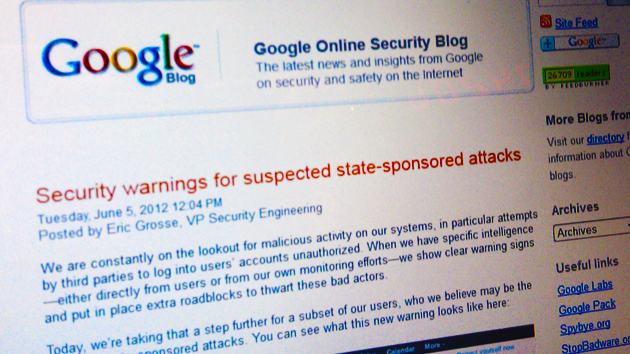 With the rise of sophisticated malware and viruses like Stuxnet and Flame making the headlines, Google announced in a blog post on Tuesday, June 5 that it will start issuing warning to users who they believe are under “state-sponsored” attack. The text, “Warning: We believe state-sponsored attackers may be attempting to compromise your account or computer. Protect yourself now.”, will appear under the main menu bar if Google believes that a cyber attack is taking place. Reports indicate that the new update is not a response to any specific attempts or events.

Google’s Vice President of Security Engineering, Eric Grosse, stated in a blog post that the warning will be triggered when the search engine receives information about an attack from their monitoring systems or from the user. Once a cyber-attack is detected Google will put in place measures to thwart the invasive activity and ask the user of the account to protect their data. The blog post did not give any specific indicators or methods that Google is employing to detect the cyber attacks. The California based company also did not mention how they knew the attacks on their users were state sponsored. The blog post side stepped the matter and stated that the company would use their analysis and user reports to determine a state sponsored attack.

The statement from Google also went on to say that if users see the warning it does not mean that someone has taken control of their account. The warning is an attempt to give users more information so that they can protect their accounts by taking defensive measures.

Google was careful not to single out a specific country that was attacking its users. However, Google did get into a battle with the government of China a few years ago when in 2009 the Chinese government put together a effort to gain access to the email accounts of Chinese dissidents. The attack involved several other US based companies including Yahoo and Adobe.