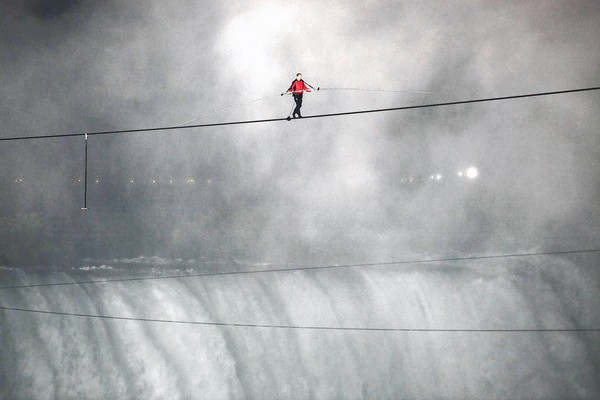 Finally, daredevil Nik Wallena successfully crossed Niagara Falls on a tight rope in a televised stunt. The show was watched by millions of people from the Canadian and U.S sides of the falls as Wallenda cautiously walked through a tightrope onto Canadian soil, at times becoming almost unseen except for his bright red shirt.

“I feel like I’m on cloud nine right now,” he said at a news conference right after completing the task. “The impossible is not quite the impossible if you set your mind to it.”

He said the first thing he did after achieving this milestone was call his grandmother to tell her that he was safe and in good condition.

Wallenda was quite confident during the walk as he didn’t slow down or even hesitate, rather gingerly put one foot in front of another. He was wearing shoes that were made by his mother to easily grip the wet wire.

When he was about to finish the journey at Canada’s Table Rock, Wallenda humbly went down on knees and waved a kiss to the crowd. Most people started saying “Let’s go, Nik!” as Wallenda became more visible in the last moments of the 34 minute journey.

Wallenda, who is just 33 years old, was determined to perform this task and lobbied several people at high level positions in Canada and United States to get the approval.

“It’s history being made,” said Michael Mescall of Collins Center, N.Y., who with his wife, Pamela, sat on a prime location near the ending point.

ABC broadcasted the entire show in a prime-time special and suggested Wallena to wear the harness before performing this stunt, although his family wasn’t interested in it.

Wallenda approached several politicians and officials on both sides of the border to seek approval, which took almost over a year. Finally lawmakers in New York lifted the ban and Canadian administrators also agreed to this event which was expected to bring millions of revenue for both the countries.

Wallenda was extremely happy to fulfill his grandfather’s dream who also wanted to cross Niagara Falls but couldn’t get the permission for it.