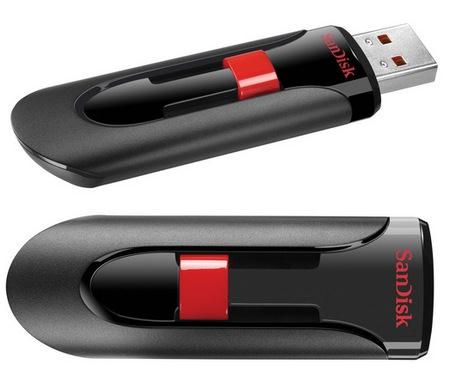 SanDisk, manufacturer of popular digital storage devices, has recently showcased its newest USB flash drive. The four new models come in different colors and styles giving consumers a whole new range to choose from. The USBs are the company’s fastest and thinnest and also have the highest storage capacity of any USB SanDisk produces. Each new device is designed to meet the needs of a specific type of user and all the flash drives are backed by SanDisk’s many years of expertise.

The Cruzer Facet and the Cruzer Pop USB flash drive are great looking devices and should appeal to younger individuals or some one that wants to stand out. Both devices are colorful and functional at the same time. The fashionable Cruzer Facet is featuring a stainless steel casing that has a facet on it giving it a unique design. SanDisk will be selling a range of these from 8GB to 32GB capacities. The price will also vary with the storage capacity and start from $32.99 to $84.99. The Cruzer Pop USB is probably the coolest of the new release and comes in great new designs and has a pop-open design. This is the thinnest USB drive from SanDisk and the 8GB to 32GB versions can easily be slipped into ones pocket or back pack. SanDisk will be selling these thin flash drives from $32.99 to $84.99.

The next flash drives from SanDisk are for a more professional crowd. They are also very suitable for everyday use. The first drive, which looks like a slick version of previous models, is the SanDisk Extreme USB flash drive. The drive has USB 3.0 compatibility so consumers can use it with the latest crop of laptops and other computing devices.  The Extreme is 10 times faster than older versions from SanDisk and can share data at 190MB/s. The device will be available in two versions with the 16GB priced at $64.99 and the 64GB drive coming with a price tag of $159.99.

The next device to be revealed was The Cruzer Glide USB flash drive. This drive is a monster when it comes to storage and has the ability to store up a whopping 128GB of documents, images and other data. The Cruzer Glide is a great choice for people with laptops or other mobile devices who want to buy portable storage with a lot of capacity. The Extra storage should give them the ability to carry around a lot of data without the bulk. Right now SanDisk is only releasing the Cruzer Glide in a range from 4GB  to 64GB with prices starting at $19.99. The 128GB version should hit the shelf in the second half of the year and is expected to be priced at $249.99.