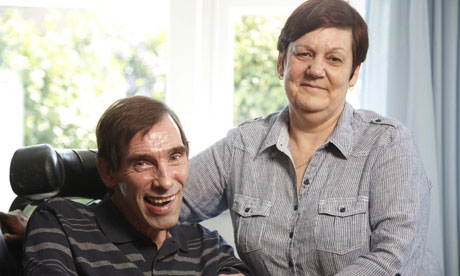 Nicklinson, a 57 years old severely disabled man, came on Twitter and connected with the entire world through a tweet.

In an accident during a business trip to Athens in 2005, he had a stroke which left him totally paralyzed. He can now only converse with small head and eye movements.

He is suffering from “locked-in syndrome” condition, which let the victim’s body incapable and powerless of doing something. Although, he can “think and reason” but does not have any control over voluntary muscles except small head movements and blinking eyes.

He can communicate his thoughts and feelings with the help of a specially designed computer which follows his eye and head movements and translates his feelings into written words; and the computer has been tailored in a way that it supports all social networking sites. Last week, he sent his first tweet with the help of this computer. Today, he has above 15,000 followers. He wrote:

Nicklinson has been fighting for the right to get rid of his life, which he calls “dull, miserable, demeaning, undignified and intolerable,” according to BBC.

In an interview with a newspaper, his wife said that “He has never been one to be shy with what he says, this is something where he can do that … He had to be coaxed in to doing it and I hope he will continue, I think it might be good for him … We know that there might be people on there who are very vocal about how they disagree [with him] but we are prepared for that.”

The high court case is scheduled today and Nicklinson’s lawyers will argue in front of the respected judge to allow the doctor to end his life, as he considers it his most fundamental human right. In return, any doctor who will do it should not face criminal charges.