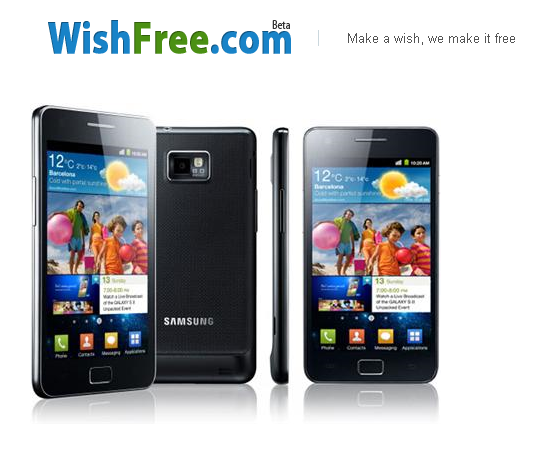 A lot of work has gone into creating fun games for people using social networking sites like Facebook. In most cases these popular games can only be played within the social network site. This is soon about to change as the addictive WishFree site gets ready to launch. Wishfree gives away highly desirable prizes to play a simple game using your Facebook and Twitter accounts.

Prizes on offer can include the latest smart phones like Samsung Galaxy SII or direct cash prizes. The game that users play is actually very straight forward. Logged in users subscribe to upcoming games which are listed in their panel. The games are assigned to different countries and only users from the same location can play a game. The game involves “Grabbing” the prize or cash on offer. A Grab is made by first entering a captcha and then sharing on Facebook or Twitter. Once a user does this the prize is in their possession. However, since other users are playing they can grab the prize back from the user. The games are timed so all players can keep repeatedly grabbing the prize until time runs out.

In order to win a user has to be the last person holding the prize when time runs out, have the most grabs or have invited a friend that wins the game. All these methods of winning mean that players have a greater chance of walking away happy.

The Game is totally free to play and users do not need to provide any information other than names, emails, Facebook and Twitter. The fast paced nature of the Grab game is fairly entertaining and the game play becomes fever pitch when the timer starts to tick down to the last second.

If you want to be one of the first people to walk away with a prize in your circle of friends, head on over to WishFree.com and get yourself signed up. Games are currently scheduled for all around the world so you should be able to get a seat at any upcoming event.