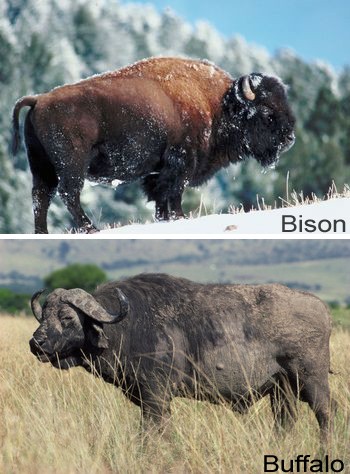 Bisons and buffalos both belong to the Bovidae family, with the same class, phylum, kingdom and order, alongside several similarities in appearance as well. This is the reason the early Americans used to call a bison “bufello”.

However, they are two different species; the American bison is native to North and South America and Europe, while buffalos (both water and cape) reside in Asia and Africa. The two can be distinguished by physical traits. While a Bison is a four footed animal with a huge structure and a large hump, a Buffalo is also a four footed animal with a huge frame, but does not have a hump.

Bisons have sharp and small horns, while those of a buffalo are blunt and long. The former has a thick fur and a beard, while the latter has light fur and no beard. Native to South and North America, Bisons live in plains, rugged conditions and extremely cold regions. Water buffalos (native to Asia) on the other hand, cannot survive rugged conditions, but cape buffalos (native to Africa) can.