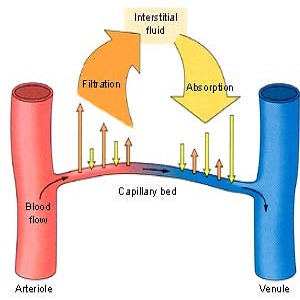 The human body is home to an intricate system of transport for fluids which are required to sustain different functions. Plasma and interstitial fluid are two essential body fluids. There are a lot of similarities in their composition and mode of operation, which means they are easily confused with each other. However, differentiating between these two is important for a thorough understanding of bodily processes.

Interstitial fluid is formed when plasma passes through capillaries due to hydrostatic pressure. However, since plasma platelets are too large in size to pass through the capillary walls, the resulting fluid is filtered and does not contain any red blood cells and platelets. Thus, the difference in composition is that interstitial fluid is blood plasma without the protein platelets. However, white blood cells are present in order to combat any infections.

There is a constant exchange process going on between plasma and interstitial fluid. Interstitial fluid bathes the cells while plasma flows inside them. This fluid surrounds the cells and provides the medium for intercellular exchange.