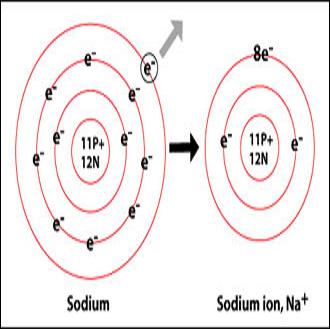 Learning chemistry might become boring when you don’t understand some of the basic concepts of the subject. You can always learn things in an interesting way and try to understand the concepts, rather than memorising the text written in the book. You will have to know about the fundamentals of basic elements before you can proceed to gain the knowledge about how a chemical reaction takes place and how new products are form. You should be able to distinguish between a number of confusing things, such as atoms and ions. Many students have trouble in knowing the differences between a sodium atom and sodium ion. These two are the basics particles of sodium, which is a member of the First Group of the Periodic Table. The main difference between these two particles of sodium is the composition of electrons in its orbits.

A sodium atom contains 11 electrons, with two electrons in the first shell, eight in the second and one electron in its outermost shell. This atom is very unstable and has great tendency to react with other non-metals. However, ions are more unstable than atoms due to the electric charge they posses.

An atom needs to have eight electrons in its outmost shell (also called the valence shell) to complete its octet and become stable. Since sodium has one electron in the valence shell and it is very difficult to gain seven more electrons for completing its octet, this atom prefers to lose the one electron and eliminates its valence shell. Now the second shell becomes the outmost shell with eight electrons, however, losing one electron disturbs the balance of positive charged protons in the nucleus and sodium get 1+ charge on it. This is called sodium ion, with one positive charge on it.