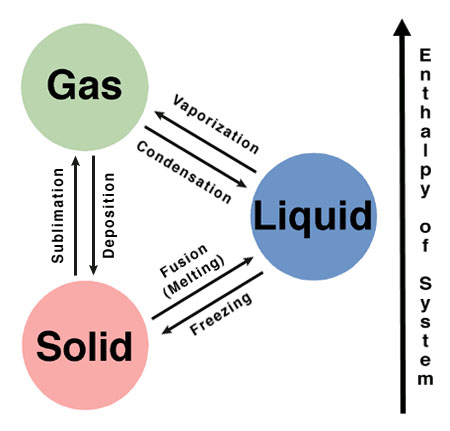 Sublimation and deposition are two phase transitions which actually change the state of a substance, for example solid changing to liquid or gas, or a liquid or gas changing to a solid state. This change in phase is mostly caused by the external factors like change in temperature or pressure. For example, a liquid converts into a gas when the temperature is raised to boiling point, or it may attain a solid phase when the temperature is reduced to freezing. Likewise, you can liquefy a gas by increasing the pressure.

Sublimation and deposition are not just phase transitions but they are a bit different than the usual changes that take place around us in our daily life. They are more extreme changes that the matter can undergo. Both processes occur naturally in the environment and play a key role in regulating the temperature of the world.

The former normally occurs in the areas that experience extremely dry weather and abnormal temperature shifts, whereas, the latter takes place usually in the clouds where water vapours undergo a deposition process and convert into ice particles, that falls as snow.