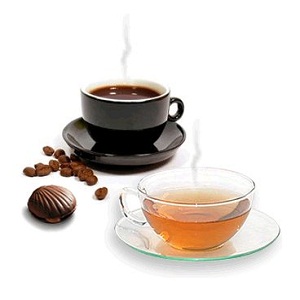 Tea and coffee are two most common beverages of the world. It is customary to start the day with a cup of coffee or tea. The consumption is not limited to the start of the day. They give each other tough competition and are known as arch rivals in the hot beverage industry. Some nations are traditional tea consumers while others are loyal to coffee. Many others love both equally. Both tea and coffee are essentially hot drinks. However, many variations like iced tea and cold coffee have also been invented and have received warm response. Because of their distinct taste and aroma, it is hard to confuse tea with coffee. Yet very few people actually know what makes these two so different.

Tea is a much older drink than Coffee. Its origins trace back to the 2737 BC and since then has remained a popular drink. Coffee is a relatively new drink. It was invented in the 9th century AD. The place of origin of tea is Yunnan province, China and Assam India. These areas still remain the major tea production centers. Coffee originated in Ethiopia and till date, the African regions produce the most coffee.

Both tea and coffee have some caffeine levels. However, coffee has much greater levels of caffeine that tea. In fact, a cup of tea has 55 milligrams of caffeine while the same cup of coffee has 125 milligrams which is more than double. This makes coffee a better stimulant because the caffeine arouses the mind.

Tea contains the element quercetin which is known to be helpful in fighting cancer and in cardiovascular diseases. Coffee on the other hand has not shown any such properties. Tea also has anti-inflammatory properties that help reduce arthritis and blood clotting. It can actually help in reducing cholesterol level which is directly related to heart diseases. Meanwhile, coffee provides relief from asthma and the Parkinson’s disease. It also helps in regulating blood sugar levels and can aid  in preventing gallstone problem.