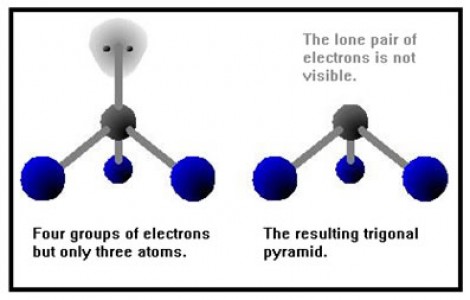 The atoms of a molecule are arranged in a number of ways to minimize the bond-bond repulsion, bond-lone pair repulsion and lone pair-lone pair repulsion. Molecules with the same number of atoms and lone pairs of electrons tend to exhibit similar geometrical shapes. The VESPR (Valence Shell Electron Pair Repulsion) theory is used to predict the geometrical shapes of molecules. As the name suggests, this theory predicts the shape of the molecule depending upon the number of electron pairs in the valence shell of the central atom. However, various spectroscopic methods and diffraction methods are also used to experimentally determine the molecular geometry of a molecule.

Trigonal planar and trigonal pyramidal are two of the several geometries that are used to describe the arrangement of atoms in a three dimensional plane. The central atom in a trigonal planar does not have a lone pair of electrons, whereas the central atom in a trigonal pyramidal has one lone pair or un-bonded pair of electrons. In the former, all atoms lie in one plane, while in case of the latter the atoms of the molecule do not lie in one plane.