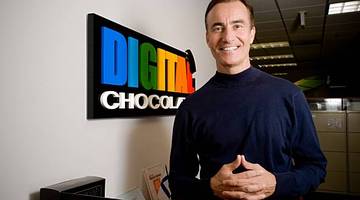 In recent days, there are some momentous changes occurring at social and mobile games company Digital Chocolate. Trip Hawkins is stepping down from his role as the Chief Executive of company. He is a renowned publisher of social games and founder of Digital Chocolate. While on the other hand, President Marc Metis acts as interim CEO of the company. Besides that, Digital Chocolate has decided to lay off about 180 employees in their different offices including San Mateo, Russia, India and elsewhere.

Hawkins is the founder of Electronic arts and incorporated that company on May 28, 1982. It was another gaming company that he founded and Monday May 28th on the 30th anniversary of Electronic Arts. Previously, he was working for Apple in 1978 and at that time the company had only 25 people, but when he left Apple, the company had grown to 4000 employees.
On his LinkedIn profile, Hawkins writes his current employment as “Computer Games Professional” and previously worked as CEO of Digital Chocolate.

Marc Metis, who was working for Digital Chocolate for more than two years, still lists as a president of the company on his LinkedIn profile. He was also performing various executive roles in Digital Chocolate such as head of marketing.

Hawkins plans to continue his work in the circle of game industry. He says “I will remain involved in digital media and games and will be available for opportunities including mentoring, consulting, teaching, speaking and writing”.

At present, Digital Chocolate has a huge funding from its backers. And in eight years, it had attracted an immense traffic both in social gaming and mobile.  However, traffic has fallen to 470,000 in the recent days.