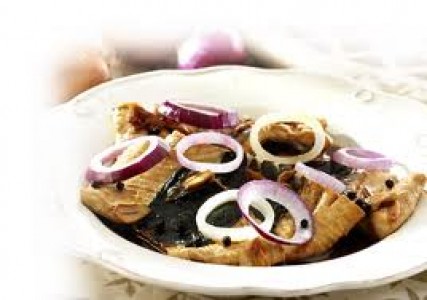 Bistek is a type of Mexican dish which is traditionally made from pieces of salted and peppered sirloin (a steak cut from the rear part of an animal). The meat is usually flattened with a meat tenderizing tool and is coated with bread crumbs before being deep fried. This recipe is usually served in fried or baked tortillas as Bistek taco.

Bangus, also called Milkfish, is a large silvery fish of the South Pacific and Indian Oceans, which is notorious for being much bonier than other fish. Bangus is the local name for deboned milkfish, and the belly of this fish makes an incredibly tasty bistek. To cook the deboned milkfish belly in a bistek style,the fish is first marinated and deep fried and then slowly cooked with onions in soy sauce and calamansi juice.


Posted by elisha-rendell in Food & Beverages