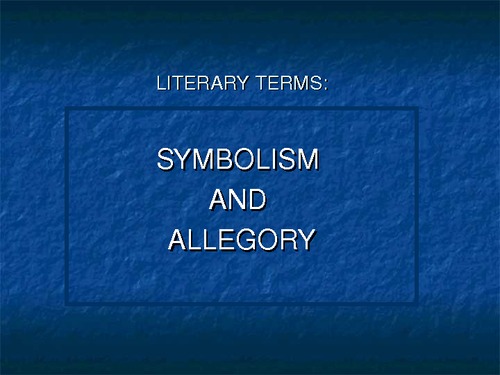 Allegory is a literary device and is often considered as a form of an extended metaphor. It is a unique device in a way that it symbolises ideas and concepts. Throughout time, allegory has been in all forms of artwork. Allegory takes its name from ancient Latin word Allegoria which means figurative or veiled language. Most of us as kids, grew up with a lot of tales, stories and fables that ended with morals that were never mentioned explicitly in the tale. This is what allegory should look like. Those who are clear about the idea of a metaphor would not have a hard time understanding allegory. In its strictest sense, allegory is a literary device that uses objects, actions and characters to represent an underlying moral or meaning that is totally different from what the object, character or a particular action literally translates into.

Most of the authors use this unique device in the form of exaggerated metaphor and that has been the case since the 13th century. This helps authors create characters that stand for something which is much bigger that what they literally represent in stories. Allegory also gives readers an insight on what the writer’s beliefs are and how he interprets and wants the world to be like.

Examples of some of the most famous allegorical works would be Aesop’s fables which is a collection of some of the most famous short stories, the Republic that was written by Plato, Divine Comedy (father of Italian literature Dante) and Hypnerotomachia Poliphili that was written by Francesco Colonna. Other examples of works rich with allegories are Gulliver’s Travels (written by Jonathan Swift), Romeo and Juliet (William Shakespeare) and Lord of the Flies that was written by William Golding in which his idea of human nature and a need of humans to put themselves above the rest was immaculately explained.

Analyzing allegory can be a tricky business so in order to find out these hidden and veiled meanings, concentration is a must.


Posted by calvinus in Literature